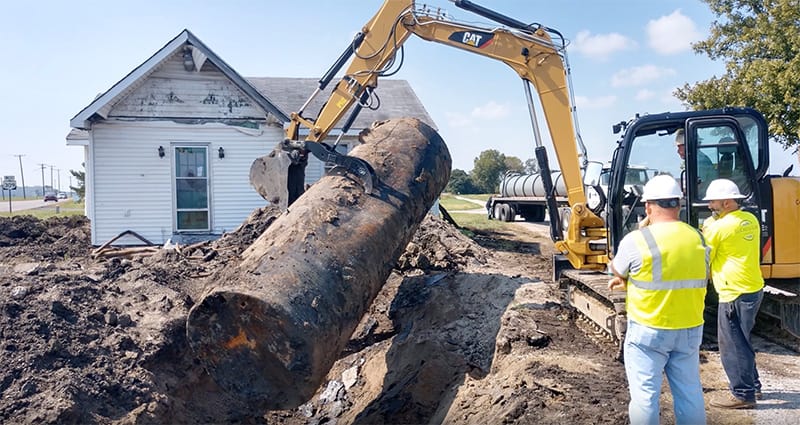 (how we did it under budget and ahead of schedule!)

In 2016, Phoenix Environmental put a door hanger on this old gas station.

Our goal:  let the community know this contaminated eyesore was grant eligible.

In 2016, Phoenix advised Marion this site was eligible for abandoned gas station

as the consulting firm.

The property had a fire years ago... It was a wee bit run down.

On the right you can see the spacious Master Bedroom…

Watch that 1st step…it goes right into the water-filled basement!

Every room needs a tree growing in the mattress.

the tops of the tanks were uncovered.  Although you couldn’t see them, three large fuel tanks and several fuel dispensers were present.

the tanks were emptied and were pressure-washed clean.

Carefully, one by one the tanks were removed

Before moving the tanks, Buckeye Elm checked the tanks for explosive vapors and made large holes in the tanks so they are less likely to explode.  Even with cleaning tanks they have the potential to build up vapors and be explosive.  Fortunately, no explosions occurred.

a “few” holes were present in the tanks.  Most steel tanks only have a life span of 20 years before they begin to rot out.

These special landfills mix microbes into the soil to further break down the petroleum contamination.

after the tanks were removed the building was demolished by Buckeye Elm.

demolition is very satisfying to watch…

After finishing demolition activities, Buckeye Elm and Phoenix Environmental closed out an old water well & the former septic system.  Permits were required to close these structures and reports were prepare for the county and state agencies.

Marion Star visited the site…  We ended up on the front page!  Obviously, a slow news day.  The article title was, ”Will the abandoned gas station near you be cleaned up?”  It discussed the two Marion County grant Phoenix has been assisting the land bank with cleaning up.

Now that the tanks have been removed, the building demolished and other environmental activities, Phoenix prepared the reports needed to satisfy the grant requirements.

When you get an NFA letter…you are done!

Well, not quite.  Sometimes you get two NFA letters.  After collecting a couple more samples now the project is done.

No Further Action (NFA) status was granted on January 24, 2019…three months ahead of schedule.  Surprisingly, considering the grant amount and significant scope of work, the project was completed under budget.

We would like to thank everyone that helped make this project a success.