The Project Profiles Below Demonstrate How Phoenix Can Be Quick, Creative, Cost-effective & Communicative:

This brownfield property, which was vacant for seven years, consisted of 84 acres of land, a 500,000-square-foot industrial building and was previously used as an automotive part manufacturing plant. Based on prior environmental reports, numerous environmental concerns were present which were complicating its sale. These included a 250,000-gallon diesel storage tank, a 10,000-gallon solvent wastewater tank, numerous hydraulic pits and reports of spills and cleanups throughout its 30-year operation. The buyer wanted a high level of confidence the property was unaffected by environmental issues.

Due to the number of RECs and the predicted cost to investigate using standard investigative techniques, Phoenix suggested using passive soil gas sampling techniques as a way to rapidly evaluate the environmental issues. Passive gas sampling was to be followed up by installing 20 soil borings to assess any “hot spots.” During the Phase 2 ESA, Phoenix personnel coordinated and oversaw the activities of a geophysical subcontractor during its electromagnetic (EM)/ ground penetrating radar (GPR) survey; supervised personnel during their installation of 69 BEACON® Passive Soil-Gas (PSG) Samplers at the site; supervised the activities of a drilling subcontractor; interpreted the laboratory chemical analysis results by comparing them to applicable Tennessee Department of Environment and Conservation (TDEC) guidelines; and prepared Phase 1 and Phase 2 ESA reports. At the request of the client, our reports were issued in draft form. The client indicated its risk tolerance for this site was extremely low. After discussing risks and potential liabilities with the client, Phoenix finalized the reports.

Passive gas sampling identified several areas on the site where impacts were present. These impacts were limited in nature and did not appear to be migrating offsite or to pose a CERCLA (aka, “Superfund”) concern. Due to the client’s low risk tolerance, it requested we take a conservative approach to the impacts. Phoenix, therefore, recommended additional assessment to quantify impacts in soil, soil-gas and groundwater.

Phoenix Environmental was retained to conduct a “short fuse” portfolio project consisting of multiple Phase 1 Environmental Site Assessments (ESA) and six Phase 2 ESAs of oil change facilities. The sites were complicated by the use of a variety of petroleum products, solvents, and numerous aboveground and underground storage tanks.

Additionally, the sites which were undergoing foreclosure required strict confidentiality by Phoenix personnel throughout the project.

Of the sites investigated, only two indicated significant concerns to the client. The results of the Phase 2 ESAs were used to assess liability and costs associated with clean-up of contamination. The assessments were completed within the proposed budget and ahead of schedule.

Based on prior investigations by others, a 1998 petroleum release from an underground storage tank system at this facility resulted in subsurface impacts to soil and groundwater.

The former owner is addressing the investigation and remediation of the release through Ohio’s Petroleum Compensation Board (“Petro Fund”).

Phoenix was engaged to provide environmental services in support of a Tier II investigation. Our activities included developing a health and safety plan and supervising an enhanced fluid recovery (EFR) event from several onsite monitoring wells. The EFR was conducted over an 8-hour period using a vacuum truck. Additionally, at a later date, we were retained to oversee installations of soil borings and to conduct groundwater sampling.

Laboratory results indicated the soils were below action-level but groundwater exceeded the calculated Site Specific Target Levels (SSTLs). The client indicated Phoenix would be engaged to assist with follow-up activities which included soil treatment, monitoring well installations and groundwater treatment by chemical injection.

Historically, this site was the corporate headquarters for Bob Evan’s Farms. In 1983, four petroleum underground storage tanks (USTs), which were used for fueling and servicing company vehicles, were installed. In 2013, the USTs were no longer in service and their removal was required by Ohio regulations. Additionally, the USTs’ presence at the site was complicating the pending sale and property redevelopment.

Phoenix Environmental was retained to assist with UST system removal and closure activities. Throughout the project, Phoenix personnel were onsite to supervise the excavation contractor, field screen soils for impacts, and advise the owner’s representative and the State Fire Marshall of the project activities. After the USTs were removed, Phoenix personnel collected 40 field screening samples and submitted 13 soil samples for laboratory analysis.

Laboratory results for the soil samples indicated no significant petroleum hydrocarbon impacts to soil were present. Phoenix provided a completed report to the client and requested an expedited report review from Ohio’s Bureau of Underground Storage Tank Regulations (BUSTR). Six days after receiving our report, BUSTR issued a letter that the site had achieved No Further Action (NFA) status. 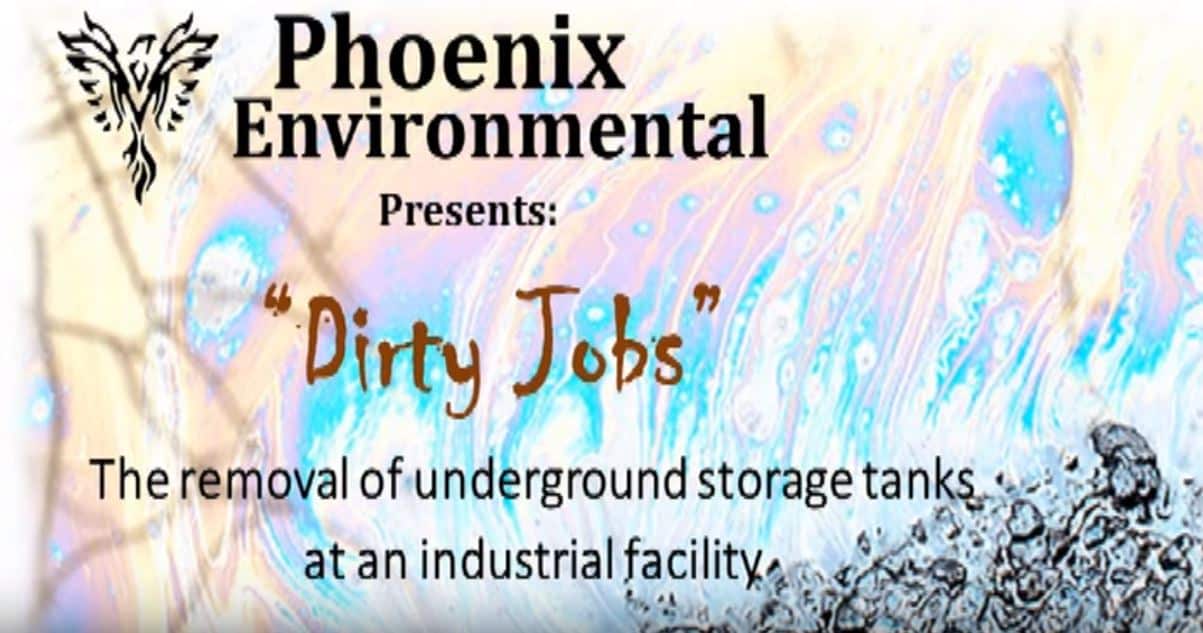 In 2014, the City of Columbus ordered the demolition of this 8,000-square-foot shopping center building. The building, which was built in the 1960s, had been vacant for over twenty years. A portion of the roof had collapsed and the interior was littered with large piles of building debris. An asbestos survey was needed prior to demolition. 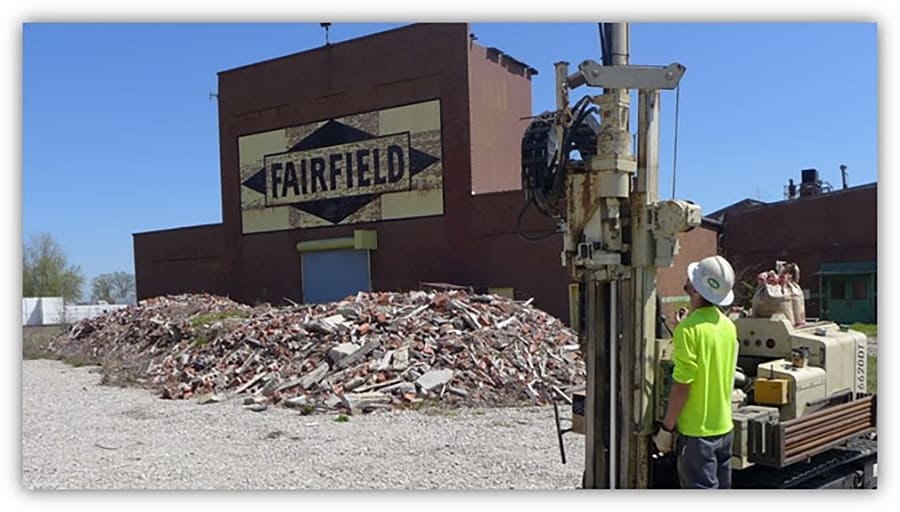 Clarksco Properties, LLC (Clarksco) and the City of Marion were awarded an approximately $340,000 Clean Ohio Revitalization Fund (CORF) grant in 2013. In May of 2015, Phoenix Environmental was chosen by Clarksco and the City of Marion as their environmental consultant to help with the implementation of the CORF activities at the Former Fairfield Engineering Property in Marion, Ohio.

Phoenix Environmental was selected based on their extensive prior experience with the site.  Mr. Jeffrey Paetz, President of Phoenix, was the Ohio Voluntary Action Program (VAP) Certified Professional overseeing this Property during the Clean Ohio Assistance Fund (COAF) investigation activities conducted before 2013.   Mr. Paetz’s activities under the $285,000 COAF grant included the completion of a VAP Property Assessment Phase I and Phase II.  The Phase I identified a total of twelve Identified Areas (IAs) on and off the Property that were an environmental concern to the site.  The Phase II included the installation of over 100 soil borings, 10 soil gas points, 25 shallow groundwater wells and one bedrock well.  Analytical results and risk modeling indicated no significant issues with soil gas or groundwater; however, soils were impacted above Ohio VAP generic standards for arsenic, benzo-a-pyrene, chromium and lead.   After completing the investigation activities, Mr. Paetz assisted both parties with pursuing a CORF grant. Activities completed under the CORF grant included the installation of additional soil borings for contaminate delineation, verification of successful asbestos abatement, oversight of building demolition, a property specific risk assessment and development of an asbestos operation and maintenance plan.

On October 16, 2017, the former Fairfield Engineering Property was granted No Further Action (NFA) and a Covenant-Not-to-Sue (CNS) status by the Ohio EPA.  A CNS protects the property owner or operator and future owners from being legally responsible to the State of Ohio for further environmental investigation and remediation relating to known releases.

"Phoenix is great to work with. They are very conscientious while working in the client’s occupied environment. It’s been a pleasure working with Phoenix."

Ensure Your Property Is Ready For Redevelopment.